“Look, I guarantee there’ll be tough times. I guarantee that at some point, one or both of us is gonna want to get out of this thing. But I also guarantee that if I don’t ask you to be mine, I’ll regret it for the rest of my life, because I know, in my heart, you’re the only one for me.” 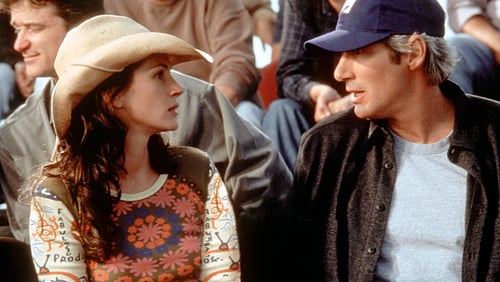 Set in Hale, Maryland, director Garry Marshall initiates this charming movie with a story written by a suave New York writer named Ike (Richard Gere) who harshly criticizes people in his daily newspaper column, especially women, but won’t analyze his own faults.  His story targets a lovely lady named Maggie (Julia Roberts) who has “run away” from three weddings leaving three different grooms at the alter.

After Ike’s life takes an unexpected turn, he travels to find Maggie as Coach Bob (Christopher Meloni) is now the fourth in line in marry her. The supporting characters which include Maggie’s best friend Peggy (Joan Cusack), Ike’s ex-wife (Rita Wilson), and Ike’s helpful friend, Fisher (Hector Elizondo). This impressive supporting cast and the outstanding cinematography from Stuart Dryburgh definitely boost the overall appeal. The background cast is also very impressive and includes Sela Ward, Laurie Metcalf, Larry Miller, and Marshall himself as a first baseman during an exterior sequence.

Filmmakers mix the genres well for overall appeal that satisfies, but does not really push any boundaries. The easy-to-understand concept title reveals more situational events in the story so it’s not as strong as a tightly-knit narrative. The Starter Wife team of Josann McGibbon and Sara Parriott wrote the screenplay that definitely benefited from all the attention the real-life “runaway bride” stories got in the media.

The popular song list practically shapes itself with obvious selection that match this movie’s themes and include musicians like Dixie Chicks, Hall and Oates, Martina McBride, and U2. Composer James Newton Howard collaborates again with Marshall on the music score.

Low key, but effective movie that comes recommended (*** out of four stars) for the large entertainment value and wide range of emotions experienced in a classy, non-profane manner.  The sequence after the ending credits is a nice touch. Rated PG for language and some suggestive dialogue.