“When I was a little boy and told people I was going to be comedian, everyone laughed at me. Well no one’s laughing now”

Set in 1981, Joaquin Phoenix’s tour de force performance combines with director Todd Phillips’ screenplay with Scott Silver as traumatic personal discoveries in the already tragic life of Arthur Fleck reveals how he eventually becomes the Joker who is best known as the most formidable enemy of DC Comics’ superhero Batman. 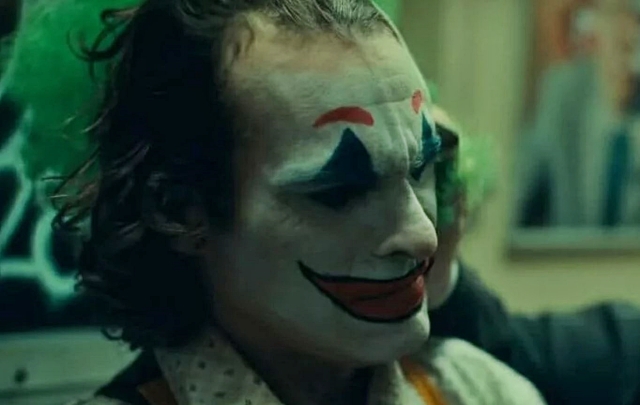 This character study/origin story is a bleak, “slow burn” into pure evil set in the fictious society of Gotham City, which is particularly harsh at this time. 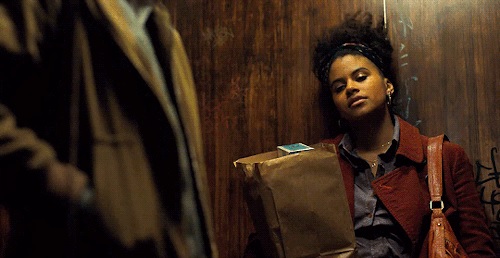 Arthur lives with his elderly mother Penny (Frances Conroy). Comedy talk show host Murray Franklin (Robert De Niro) and his neighbor Sophie (Zazie Beetz) catch Arthur’s attention. Other key roles include Detective Burke (Shea Whigham) and Detective Garrity (Bill Camp) and Arthur’s co-workers Randall (Glenn Fleshler) and Gary (Leigh Gill) as well as Brett Cullen who portrays an important figurehead in Gotham. Brian Tyree Henry (Atlanta) has a great, small role as a clerk in Gotham’s Arkham mental institution who states three points that perfectly summarize how people get into Arkham in the first place. Many characters also demonstrate some bad behavior as they mix in with all the elements, action, and results that result from the constant lack of love and even empathy in this world.

Phoenix lost 52 pounds to play this lead role as the movie mainly centers on him. His every action expresses pain and his desire to escape his pain. His eventual discoveries and unfortunate progression keep the plot moving.

Here a traumatized and troubled man with seemingly uncontrollable laughter reaches his personal limits then takes his own journey into unforeseen territory that only adds more hate and chaos.

Audiences can identify with Arthur’s situation, but his personality or motives are unique, which create a huge storytelling element since we’re seeing these events through his perspective.

This perspective easily prompts some questions, which adds another layer to this crime-filled drama-thriller. Arthur comments on a society that he doesn’t fully understand and says “Is it just me, or is it getting crazier out there?” … is Gotham really getting worse or is Arthur just deflecting his own descent into madness. Even Arthur asks himself “is this real?”

Arthur’s will is strong and he gets through some major obstacles to get what he wants. He’s not very smart or tactful just committed to getting some answers about his life and a bit lucky. In Christopher Nolan’s The Dark Knight, Heath Ledger’s Joker portrayal played off on madness and genius, especially in the line “Do I really look like a guy with a plan? You know what I am? I’m a dog chasing cars. I wouldn’t know what to do with one if I caught it! You know, I just… *do* things.” Ledger’s Joker acts crazy, but really is a genius.

In this film, audiences never get the sense that Joker is a genius or will become more than he says. He leans on his disturbing journal for material to say. He stalks people instead of talking to them. He uses TV clips to practice how to act and is usually desperate for any interaction. He is delusional about his big break (“Everybody’s telling me my stand-ups, are ready for the big clubs”), and his overall identity (“For my whole life, I didn’t know if I even really existed. But I do, and people are starting to notice”). Eventually, Arthur turns the barbs and personal insults he receives back on the offenders, but it mainly serves his self-centered desires and personal satisfaction.

So how does Arthur get elevated into an urban god status? The people in this society use Arthur’s actions (and a key “clown” comment for a city official) as a beacon to express their desires, views, and frustrations. Filmmakers really enhance this point when random characters physically elevate Arthur in a key sequence near the end.

Also, in another key difference in the approach of Nolan’s film, this Joker film crew reaches the same dramatic effect minus the constant menace thanks to some key editing (e.g. showing the aftermath of Arthur’s argument with his mom that drives her to seek shelter in the bathroom as he raves and she pleads with him to stop). Filmmakers spare audiences from the unnecessary emotional strain that would overstate what is already known – Arthur’s increasingly disturbing actions wreak havoc and pain for everyone involved.

The plot has some great surprises, including one instance where I was jolted by the logic of a particular situation and then questioned why a character is getting unnatural interest and even interaction/rewards for his bad behavior.

The haunting, string-filled musical score by Icelandic cellist Hildur Guðnadóttir fits the tone and mood perfectly while filmmakers frame even more emotion around key songs, especially “That’s Life” by Frank Sinatra. Filmmakers also use the music to stage impactful sequences as well like choreography in Joker’s kicks within the key dance number on a long outdoor staircase that also includes two noticeable figures at the top.

The realism that filmmakers incorporate into the 121-minute Joker makes it thoroughly thought-provoking. Cinematographer Lawrence Sher paints the picture well reflecting that the most compelling and worst in society comes from our mind…no special effects, big-budget visuals or computer animation needed here.

Not entirely a stand-alone work from the DC Extended Universe (DCEU) since it mines several characters, elements, and surprises from it, but don’t expect this Joker to duel with Robert Pattinson’s upcoming Batman portrayal.