Get inspired by I Still Believe through video on demand starting today. Based on the life of singer-songwriter Jeremy Camp, this film focuses on touching events of hope, love, and resilience.

Directed by brothers Andrew and Jon Erwin (I Can Only Imagine, Woodlawn, October Baby). Jon also co-wrote the screenplay with Jon Gunn, director of The Case For Christ. 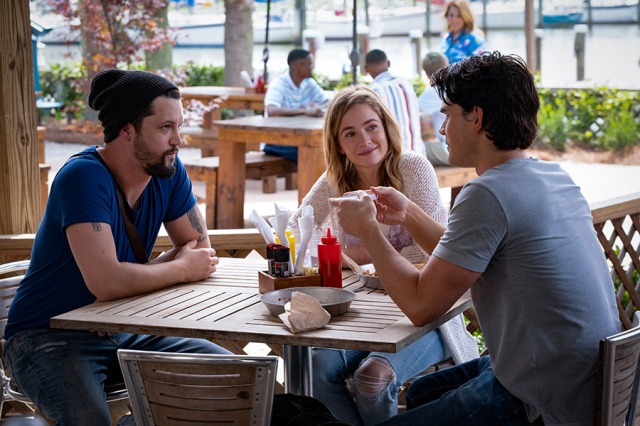 New Zealand native KJ Apa (Riverdale series) does all his own singing in this film and actually plays guitar and piano as well. Actress Britt Robertson (Tomorrowland) also uses her singing talents in this film as she portrays Melissa. Nathan Dean (Roswell series) portrays Jean-Luc LaJoie, lead singer of The Kry who helped Camp early in his career.

Honest moments really focus on the characters’ struggles and their ultimate purpose in life. Musicians at the college admit not all the songs they write are about God. Bible verses are not front and center in the presented content, but the heart, meaning, and mentions of God are still there.

Filmmakers show how these Christian characters shine God’s light, especially in an interior planetarium sequence where Melissa shines the light of her personality and faith in God amid the star-filled scape that encompasses all of us. Audiences can relate to this point of view, which might strengthen and enhances their faith, prompt them to discover more about God, question their own views, or receive rejection.

Since the plot aptly focuses on Jeremy’s and Melissa’s personal lives, the largely Christian college settings limit these lead characters’ exposure to other people who don’t follow their faith. Hopefully, audiences will see more films (like The Case For Christ) where Christian filmmakers explore, engage, and teach through instances where these two cultures engage each other, but this film maintains a concentrated scope.

Apa and Robertson previously starred together in the 2017 film A Dog’s Purpose and show extraordinary chemistry together. This relationship allows filmmakers to showcase this pair utilizing their impressive skills. For example, the lighting and composition impressively displayed combined with Kristopher Kimlin’s cinematography boost this experience beyond average fare.

Audiences can easily escape into Jeremy and Melissa’s background since screenwriters focus on the characters’ actions using compositions that create several genuinely emotional moments without losing momentum throughout the one-hour and 56-minute running time. Filmmakers portray the relationship progression well and include a standard montage, which helps reinforce their special time together.

These family members are utilized well and elevate Apa’s performance. Initially, they question Jeremy’s growing relationship with Melissa and factor into the relationship’s progression, specifically during a sequence where the family visits Jeremy at college.

It would have been nice to see Twain get more opportunities to shine here. Sinise says a lot with little as he’s the perfect candidate to deliver that predictable, but essential, wise advice sequence with Jeremy.

The moving soundtrack packs power with composer John Debney’s musical score. Debney also contributes on the songs while Adrienne Camp, portrayed by Abigail Cowen in the film, performs a bonus track titled “I Can’t Save Myself” on the official soundtrack.

Filmed in the Mobile, Alabama area, I Still Believe initially debut in IMAX theaters on Wednesday, March 11, 2020 and is the first production by Kingdom Story Company, which will soon release American Underdog: The Kurt Warner Story.

This heartwarming narrative provides an incredible example of keeping faith in God no matter what it is happening in our lives. Recommended (***) and rated PG for thematic material. Now available on Apple TV, Amazon Prime Video, Google Play, YouTube, Christian Cinema, and other on-demand platforms. Viewers have 48 hours to view the movie once ordered.

2 Responses to I Still Believe